Why you should discover Skye's smaller neighbours

The Isle of Skye is not exactly a travel secret. The largest of Scotland’s Inner Hebrides is a glorious island, but did you know that it has a sprinkling of island siblings just to the south? And what siblings they are.

The Small Isles – the four main islands in order of size are Rum, Eigg, Canna and Muck – are a brilliant alternative to Skye, or you can cover Skye and the Small Isles on an extended trip. 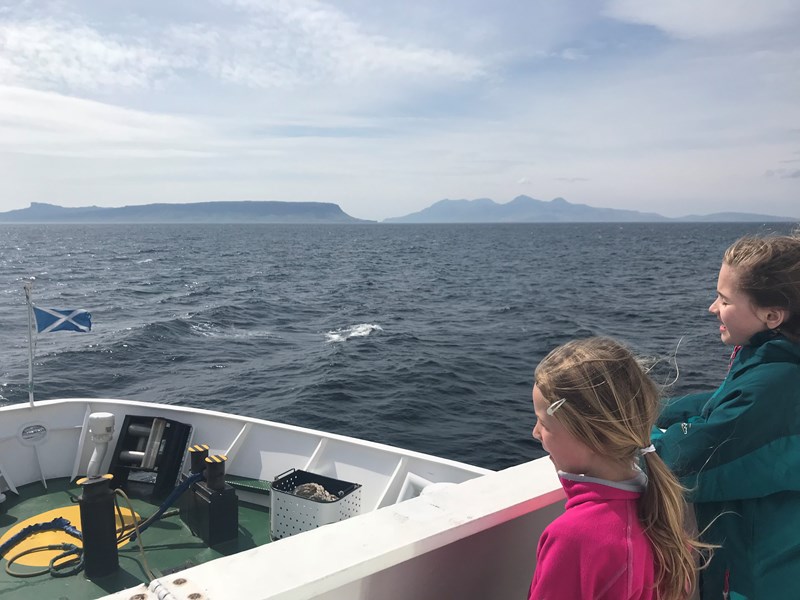 So would you like the Small Isles? The answer is yes if you love hiking, biking and messing about in the Great Outdoors. Yes too if you like chilling with island-brewed craft beer while tucking into local mussels with a sea view. And yes if you want to learn about life on four very different islands, islands that make you think about how we all live our lives.

Handily the Small Isles boast a brace of Scottish Hostels boltholes. Glebe Barn is a great place to stay on Eigg, situated only a mile from the ferry pier. It’s a welcoming place and the windows are a huge attraction with great views opening up of this gorgeous island. The Isle of Muck Bunkhouse reclines on the eponymous isle in Port Mor, again handy for the ferry. It offers great views too – this time of the bay and the peninsula of Ardnamurchan back across on the mainland.

Getting to the Small Isles these days is a breeze aboard CalMac’s Loch Nevis, a purpose built ferry that links the main Small Isles quartet. You can’t bring your own vehicle, so that keeps traffic on what roads there are to a bare minimum. There is a passenger ferry from Arisaig too. This life-affirming archipelago is a wildlife-rich, ridiculously scenic oasis for all. What are you waiting for?

Rum
The largest of the Small Isles is a rugged, wild and wildly beautiful mountainous charmer. It hit headlines around the world in 2020 during the long Covid summer when a competition was launched to find four families to come and live in new purpose-built sustainable housing on the island. There were over 3,000 notes of interest from all over the world. I’ve just been back on Rum and those winning families are all settling in nicely. 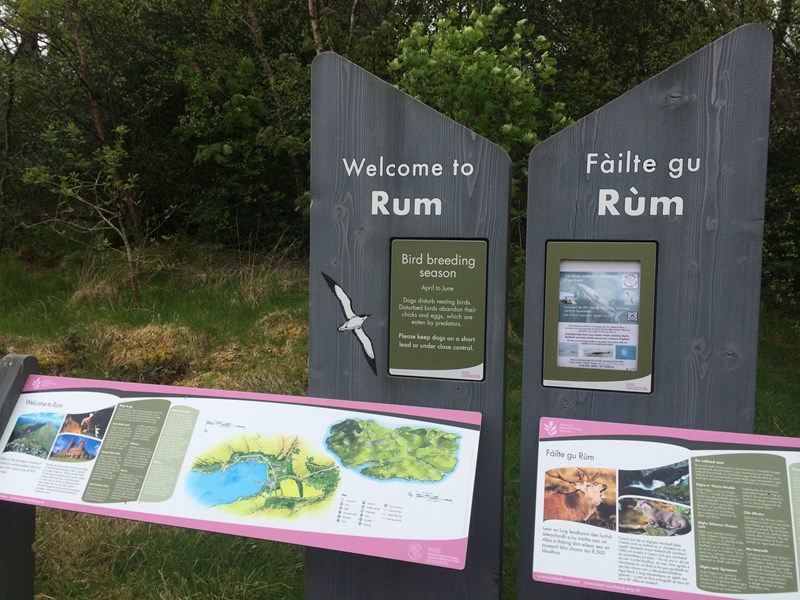 On first sight this brooding real-life Treasure Island can strike fear and trepidation into timid hillwalkers. That is no bad thing as - unless you have hillwalking experience and the right gear - you should steer well clear of the mighty peaks of Rum and its epic Cuillin ridge, which mirrors its namesake on Skye just across the water.

Rum also boasts gentler charms. I say gentler, but wild tales surround Kinloch House, an unlikely Edwardian country house pile set adrift in the Hebrides. It was built by an English family in serious opulent style and was notorious for outrageous parties. You can peer in today and see the taxidermy animals and the grand Steiner piano that evokes those nefarious days when it took 100 kilt-wearing staff to run.

The wee village of Kinloch itself sports a village hall that is the hub of local life, complete with a café. A rum distillery – Rum rum just had to be made – has recently opened and you can try a wee sample in the shop before buying one of the stylish bottles. Fortunately it’s not a case of style over substance as the rum is lovely – rich and fruity with a proper punch.

The wildlife is exceptional on Rum. There are far more red deer, the largest land mammal in the British Isles, than people, while in the air look out for the giant hulk of the sea eagle – closer in size to a flying barn door than a golden eagle. The waters all around the Small Isles are also alive with porpoises, dolphins and all manner of whales. Last time I sailed around Rum we caught sight of killer whales.

Eigg
I love all the Small Isles, but Eigg may just be my favourite. A major part of the reason is that the island has been community owned since 1997 and celebrates its 25th anniversary of community ownership on June 12, 2022. Eigg shows what can be done when fragile – and declining – island communities are allowed to manage the island as a community. This sustainable green gem became the first island in the world in 2008 to harness all its own electricity through green sources: a mix of wind, solar and hydro power. 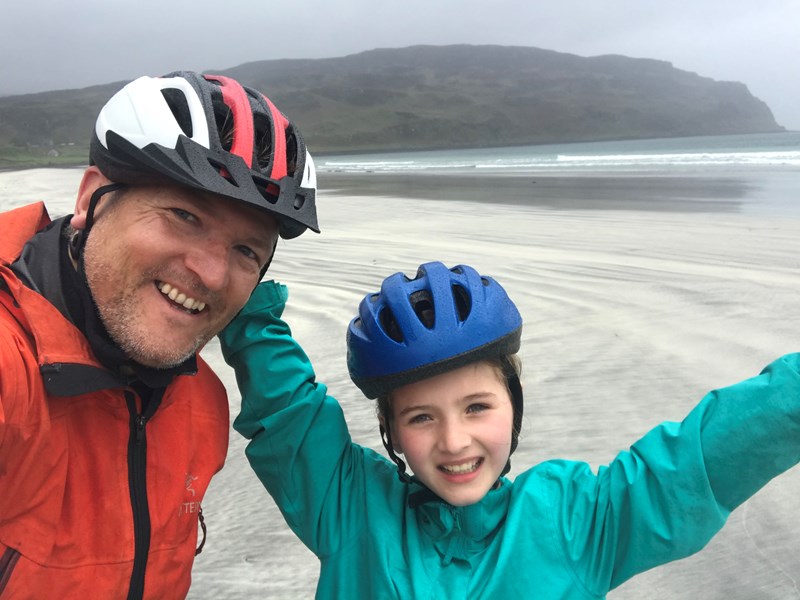 The welcome, as it is on all the Small Isles, is a warm one. The residents of Eigg stand out for their energy and positive spirit as they continue to grow the population and secure a brighter future. In 2022 the new WT Architecture-designed An Laimhrig community hub opens, as well as a crowd-funded brewery. At Galmisdale Bay café and bar I love that they keep their shellfish fresh by hanging it in creels off the pier.

Eigg is also home to my favourite hike in the Small Isles, up An Sgurr. This unmistakable volcanic plug shoots up to 393m and looks unassailable from the ferry quay. In reality it is actually quite easily tamed if you hike around the back. On a good day the views are mind-blowing as all the other Small Isles and Skye shimmer all around. Also mind-blowing is the 166 million-year-old, one foot long, Stegosaurus bone fossil, found on a beach in 2020. It proves that dinosaurs roamed previously unknown areas of Scotland during the Jurassic Age – make sure to keep a keen eye out as your roam Eigg’s rugged coastline.

Canna
This National Trust for Scotland owned island is a wee stunner that curls around the back of the archipelago, gazing out across the Minch towards the Outer Hebrides. You get two islands here for the price of one as Canna is joined by a wee footbridge to Sanday. Go easy on Sanday as last time I was there I got knocked off my feet by a hulking ‘bonxie’ (a great skua). Bonxies aside, these island twins are great for hiking around with basalt cliff, wee hills and plenty of coastline to explore. Make sure to visit Canna House, with its walled garden and aromatic tunnel of escallonia. 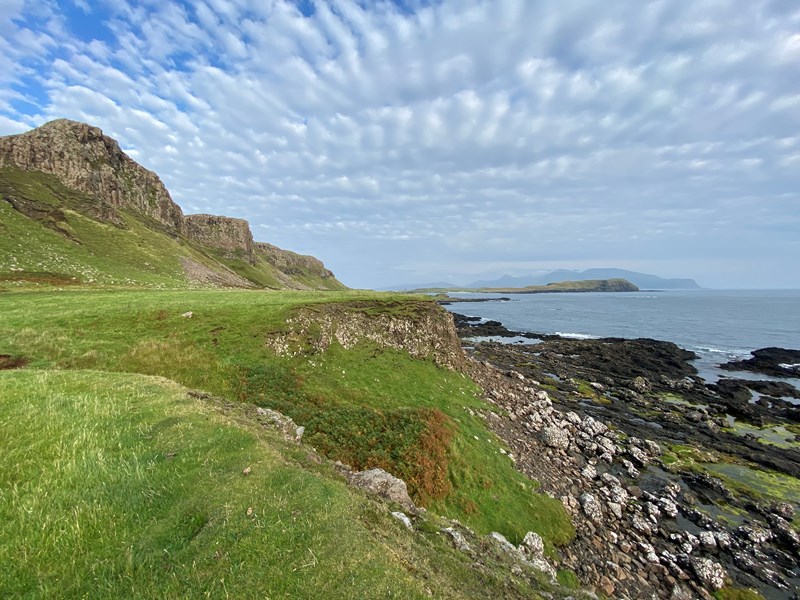 As well as bountiful wildlife – over 20,000 seabirds flock here in summer - you will see plenty of sheep and cows as the National Trust for Scotland owned and managed Canna still functions as a working farm. You can learn more about the island and its unique heritage at the wee museum housed in the farm dairy. Things are changing on Canna with the NTS recently announcing plans to give its residents more of a say in its running.

Canna, with its mild climate, is a great place to just sit and watch the world go by and the yachts slip in and out of the best natural harbour in the Small Isles. Don’t miss Café Canna, where you can feast on Canna lobster – they row out to heft it out of a creel for you - and also on local rabbit stew. The wee honesty shop next door is open 24/7.

Muck
Tiny Muck may be the smallest of the Small Isles, but it packs a fair whack into its bijou land area. Muck reminds me in some ways more of the likes of Coll and Tiree with its beguiling mix of fertile farmland, low hills and beaches. 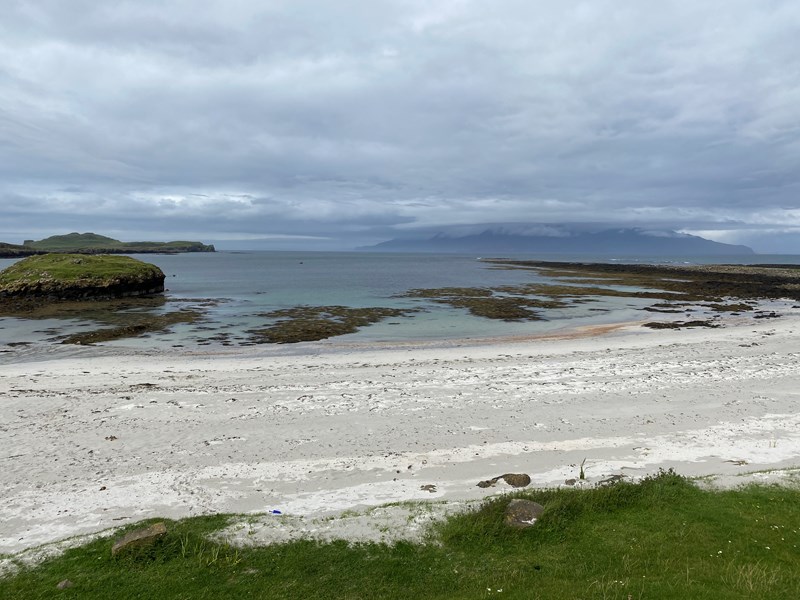 My favourite walk on privately-owned Muck starts right at the ferry pier. You push inland on a sinewy ribbon of sealed road across the island to Gallanach, where a wide beach leads out towards an offshore isle. There are plenty of Luing cattle and sheep as you go. Last time I was here I saw both an otter and porpoises. Then you start to ascend across boggy ground up Beinn Airein, at 137m the highest point on Muck. I love that you can make out the fellow Small Isles, but also gaze south to Coll and Tiree.

Listen out for corncrakes on the way back as Muck’s traditional agricultural techniques have tempted them back. There is little else to do, nothing you need to do – a very Small Isles feeling and a sheer joy in these turbulent times of mental overload.

Our hostels on Skye & the Small Isles

Dun Flodigarry is an independent,family-run hostel in the North end of the Isle of Skye, which has been welcoming visitors since 1992. We have 29 b...
Read more >

The Flora Macdonald Hostel stands in magnificent surroundings at Kilmore in the south end of the Isle of Skye with stunning views of the Knoydart m...
Read more >

The Lodge has a fabulous location in the heart of the village of Kyleakin facing the sea overlooking Loch Alsh, the Skye Bridge, the ruins of Castl...
Read more >

The beautiful Isle of Eigg is a haven for nature and wildlife lovers, photographers, artists and outdoor enthusiasts alike. Stunning beaches and co...
Read more >

The Bunkhouse is a self-catering hostel (sleeps 8, 4 bedrooms (1 double and 3 bunk rooms)), which can also be hired as a holiday cottage. It is sit...
Read more >

Welcome to our magical Isle of Rum and the Rum Bunkhouse. We're a small, community owned accommodation located in the village of Kinloch on the Isl...
Read more >